Herbie is a Winner!

Another award for Old Copse. This time it's for the best Woodland Dog. Many thanks to Woodlands.co.uk. We won a couple of years ago both for this  Blog, and  for our beautiful traditional  log cabin made from our own trees. Now it is Herbie's turn. He is borrowed from friends each week to accompany us to Old Copse. He completely enjoys the whole experience, and we love having him with us.

Though  he didn't get a rosette,  he's been enjoying his other prizes - bags of chews, and a useful collapsible travelling food bowl.  We did rather better on the prizes front, (sorry Herbie) with a woodland related book, a smart hardbacked notebook,  a Kelly Kettle, a sturdy canvas bag for log burner  kindling, a woodland themed  tea towel  and  tin mug, and lastly a fire steel which we will be trying out soon.


Here is Herbie a couple of years ago romping through the bluebells. A deserving winner! 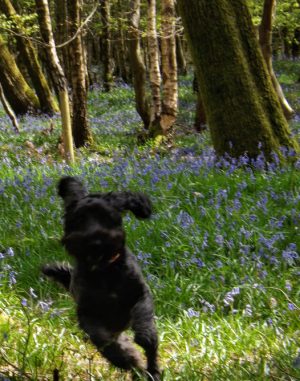 “Herbie the Cockapoo is used to the urban life but is a very enthusiastic woodland volunteer. Likes: sticks, digging, exploring, paddling, tracking deer, keeping guard. Dislikes: machinery, having to go home.”
His favourite game at this time of year is flushing out pheasants. He has yet to actually catch one though.
•
•
•
•
•
•
•
•
at 21:38 No comments:

September has come and gone, with endless rain. While this has made more difficult the mammoth non- Old Copse project that has taken up almost 20 months of our time, the wood has enjoyed a good soaking. Even though it's mid October, the leaves are only just beginning to turn and some of the oaks remain stubbornly green.

Our big project  has kept us from doing much in the wood, apart from quick visits to restore our sanity. It really brings home how the wood operates on a different timescale to urban life. There really is no tearing hurry: the wood operates on it's own time frame. The growing season has finished and everything is now slowing down and preparing for winter.

This autumn has been marked by an astonishing crop of fungi - much enjoyed by the West Weald Fungus Identification Group who made their annual visit on October 16th. The purple web caps were the star of the show, and this year are growing in multiple locations. Up by the car park I found over 20 individuals. Full report to follow once Dick Alder has collated their findings.


Much work remains to be done in the autumn, once time and other commitments permit.


Not to mention more planting - trees to order and arrange to plant in OC2.

A tale of two traps

It has taken me far too long to realise that most of the fine trail cam video that is posted on Facebook doesn't happen by accident. Those badgers and barn owls didn't happen to be just wandering past and decide to stop in front of the camera..Of course not! The space in front of the camera is baited with food - and the price of a free dinner is to have their photo taken. Up until now I've been using the trail cam to try and find out more about the life of the wood when we're not there. I've been interested in tracking the movements of deer and other creatures, and looking for patterns, rather than getting close ups.  The results have been informative - see this post from 2018 but not particularly visually interesting.

In the first week of August the camera finally caught a snap of the badger - the first sighting for a couple of years. I decided to change tack and see if I could get a better shot of him. I set up the trail cam as a camera trap with a lovely bucket of windfalls scattered on the ground in front of it, and waited to see if he would be attracted to a free apple meal.

Unfortunately, three buckets of apples later, all I have been feeding, are deer. I have endless shots of fallow - and the occasional roe - happily munching apples.

They scoff the lot as soon as we've gone, and leave none for badger who only comes out at night.

They bring the babies for a free meal.


So I think I will stop this particular experiment, as we definitely don't want to encourage any more deer.

The other experimental trap is more lethal  - a high tech self-resetting squirrel trap. Despite the efforts of the stalkers, the squirrels are still shredding the beech trees, and so we've invested in a new trap to try and help keep the numbers down. The trap is new to the UK and was developed in New Zealand, based on the design of a successful possum trap. A small CO2 cannister powers a bolt which zaps  any squirrel who sticks his head in the cylinder to take the delicious chocolate nut bait. The dead squirrel falls to the ground and the body is scavenged by foxes or buzzards. A digital counter records how many times its been fired. 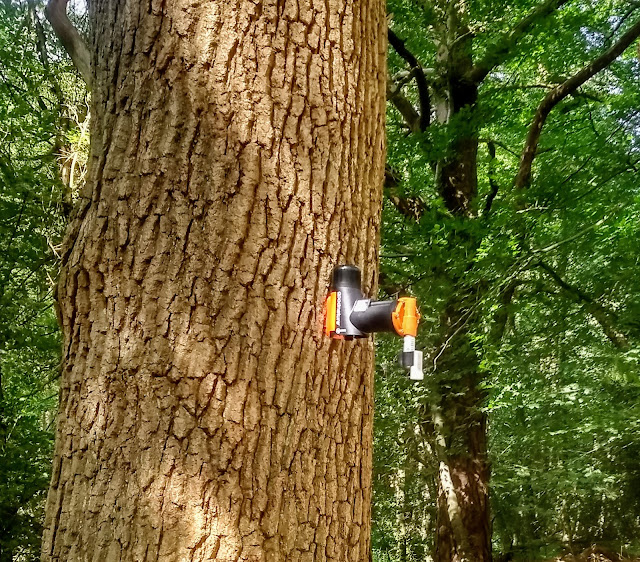 Well that's the theory. I've checked it every week and the killing counter remains stubbornly at zero. I thought I'd encourage the squirrels to find it by baiting the area around the trap, and have been scattering around a pound of maize kernels from the pet shop. These have been disappearing fast enough, but judging from the number of small holes nearby, I have been feeding - mice.

So not so much a tale of two traps as a tale of unintended consequences.
at 00:25 No comments:

Although July is a bit late in the season to start growing vegetables, we decided to get  the new raised beds filled with good quality topsoil  to be ready for some overwintering vegetables, and next year's planting season. It was delivered in huge bags on a very smart lorry with a crane attached. Using remote control the grabber lifted them from the truck and hoisted them into position. When in place the operator slit the bags to empty the soil directly into the beds. A fast and efficient operation with no shovel in sight.  Quite a spiffy set up - very impressive.

We planted out a few rows of tomato seedlings and some garden sorrel, brought from home. Both are now growing like crazy in the deep rich soil aided with all the hot sun and rain we've had. 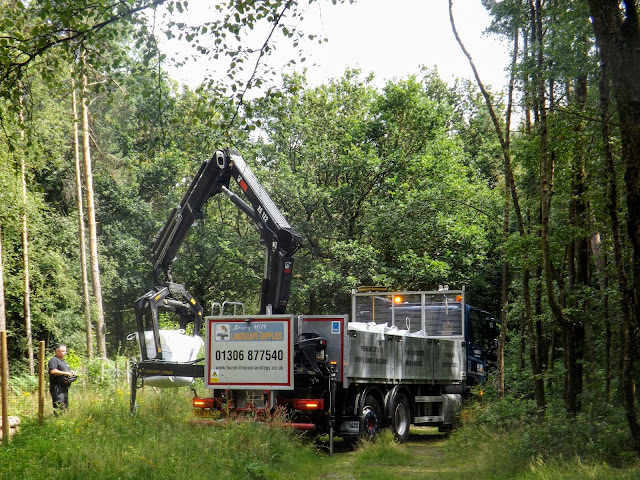 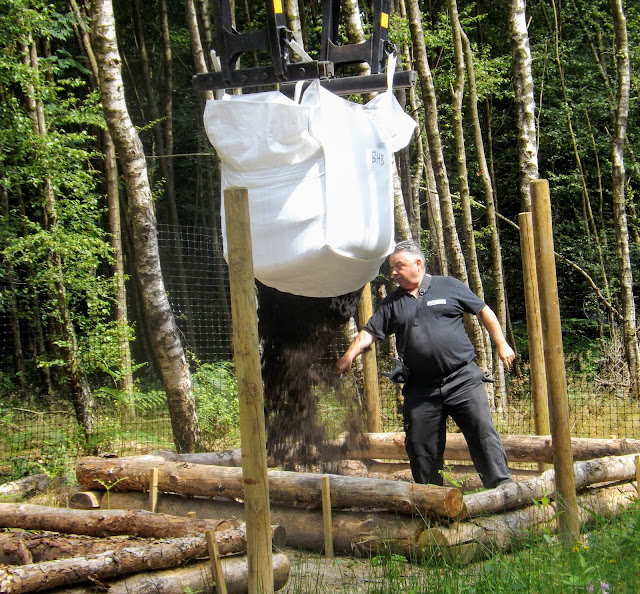 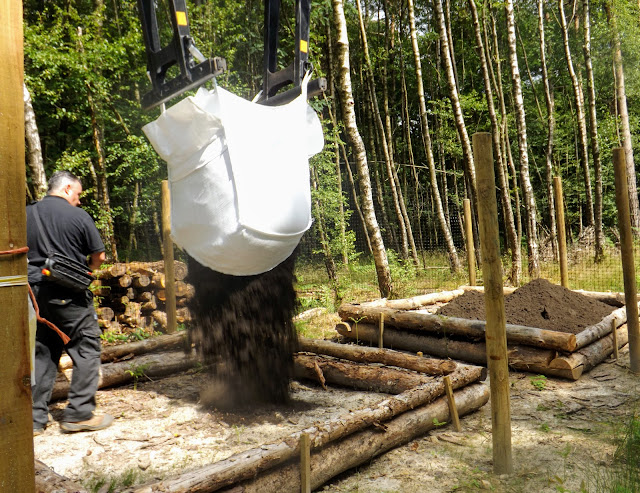 With concerns about the loss of the planet's topsoil in the news recently (much of it caused by deforestation) we were careful where we got ours from. See the link below:

The bats are a key part of life at Old Copse. One of the wood's great pleasures is to sit by the water's edge at the end of the day and wait for them to emerge as the light fades. They come whizzing out of the trees, zipping over our heads and swooping out over the pond. Although the fishermen told us these were Daubenton bats, we never knew if that was right or what other species were also there. So we were really pleased when Kevin Erwill of the Gatwick Greenspace Partnership and Martyn Cooke of the Surrey Bat Group agreed to come and spend a Sunday evening at Old Copse to help identify our bats.

Martyn arrived with some impressive kit; a large antenna sprouted from a backpack which turned out to hold a very sophisticated bat detector.


Down at a swim at the edge of the pond, after a bit of a wait the first bats came out - Soprano pipistrelles (Pipistrellus pygmaeus) and common pipistrelles (Pipistrellus pipistrellus). According to the Sussex Bat group both of these are widespread and fairly common in Sussex. Then as it got darker the Daubentons bats (Myotis daubentonii) came out to hunt across the pond. It was a real thrill to watch them through Martyn's infra red binoculars, which picked up not only the bats but their reflections as they flew over the water. It was a genuine privilege to watch and listen to something that's usually hidden in the dark.

This bit of film of Daubenton's from the Bat Conservation Trust (although not via infra red) gives an idea of what we saw.


By then it was almost pitch dark and we tried our luck in a different habitat, in the big clearing in OC1. Martyn's kit clearly picked up four more species:

And even what he was certain was a Bechstein's (Myotis bechsteinii), a very rare bat indeed. And who are we to argue with an expert?

So that's seven different types of bats identified in a couple of hours. According to Martyn there are 12 species at Gatwick, so it's likely that there are more than seven at Old Copse. Maybe I'll invest in a bat detector...

The trail cam was up taking photos and video on the ride in OC1 from 9th -20th June. We were hoping for all sorts of wildlife, but what we got was - deer.

Mostly the camera caught individuals, usually appearing between eight and ten o'clock in the evening. It was good to have confirmed that the deer management is having an affect on numbers. Heading south to north, they often stopped to feed on the holly hanging over the ride.


The fallow have had their babies in the forest and are now coming back to Old Copse. This mummy and baby came through on a Tuesday afternoon just after four pm.

They stayed in the wood until half ten in the evening, when the camera caught them heading back the way they came - this time in the dark.


After 12 sightings 9th-12th June, fallow sightings stopped apart from a couple of individuals several days apart - again at their favourite times of 8-10 in the evening.

We don't see that many roe deer, so it was good to catch this individual taking advantage of the fallow's temporary absence to have a good run on the ride.

This is the time of year to go around the wood looking for seedling trees. They are springing up everywhere, primarily oak, beech, cherry, rowan, alder buckthorn,and  birch. If they're growing in the 'right' place, which is just about anywhere off the Ride, we mark them with a red topped stick and return later to protect them from deer with a small tree tube and stake. Any that pop up on the Ride itself are dug up and planted in the tree seedling enclosure to grow on  and planted back in the wood when they are are a decent size. The birch come up in their hundreds, and dozens have come up around the cabin. Usually the deer eat them  but this year, for the first time we can remember they have hardly touched them. We think it's a combination of them being elsewhere in the Forest at this time of the year, and good deer management.

This annual job is a really good way to examine what's going on in the wood at ground level. We got really excited when we spotted this empty nest hidden in a mass of dead bracken. Could it be a woodcock's nest? We have seen and heard them in the wood, but this nest seemed a bit big. After a bit of Internet research we concluded it was probably made by the Canada geese. It was beautifully made, but how successfully Canadas rear their young is another question. We're always coming across eggshells in the wood, presumably predated by squirrels and foxes. 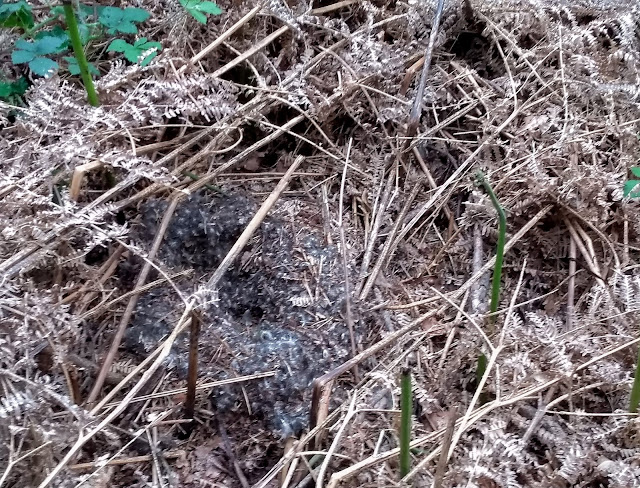 The bees are doing well.On June 9th Krzyzstof came to harvest Old Copse honey for the first time. We'll find out how productive they were when we next see him.

Here's a link to Kris's Instagram account with a bit of video of Old Copse bees enjoying the sunshine.
at 14:33 No comments: