A cabin in the woods


Last year we obtained 'permitted development' approval to build a small woodland structure that would give us somewhere to shelter in bad weather while carrying out forestry work,  and also provide a social focus and a place to enjoy the wood in considerably more comfort than squatting on a wet log under a flapping tarpaulin.

We considered our options. We heard  stories of small wood owners who had put garden sheds and similar on their woodland,  including a sad story of a chap who arrived one day to find that his shed had been broken into and all the contents removed. This was bad enough, but a few days later he returned to find the shed itself had been dismantled and carried off.

So we decided that we needed something very sturdy and as vandal proof as possible. We looked at the possibility of getting a shipping container into the wood, but apart  from the size and ugliness factor, it would have to be craned to the (sloping) site. Not easy. We then found a firm that provided a flat pack arrangement which their promotional literature showed being  used as an office,  in refugee camps, and at army checkpoints. This had certain  advantages over a shipping container, being easier to move to the site, and smaller. But we decided that neither would do. Both options would need disguising in some way, with, for instance, wood cladding.

A grandson then suggested  that a proper log cabin was the answer. This seemed like a great idea particularly if we could use our own timber. The wood is partially 'PAWS', (Plantation on an Ancient Woodland Site) and so we had plenty of 60 year old Scots Pine that we had to get felled anyway as part of our management plan. But who would build it? We gave it careful thought. There is no tradition of roundwood log cabin building in Britain. Our internet research initially turned up adverts for what were called 'log cabins' but which were in fact factory made chalet type buildings, one step up from a garden shed. North America seemed to be full of people building their own traditional roundwood log cabins. There was also plenty of information from the Nordic countries and Eastern Europe, though not in English.

We also found a few small companies  in Scotland and  on the Welsh borders who offered roundwood log cabins built to Eastern European and  Scandinavian design. But we could find no-one nearer home in Sussex. So we had to do a bit of lateral thinking. We searched for Polish clubs, and without difficulty found  a Polish Social and Cultural Society. We contacted the secretary and she managed to find us a small group of Polish craftsmen from southern Poland who had the skills needed to build us a log cabin in our wood using our timber.

Last week a start was made despite the appalling weather. The forester, David Abbott of Sparrowhatch Forestry in Sussex came in to fell 40 large Scots Pines. and cut them to lengths.  Kris, Mariusz and Piotr followed hot on his heels to handstrip the bark from the logs.  The actual build will start when the weather gets a little better, probably in May. 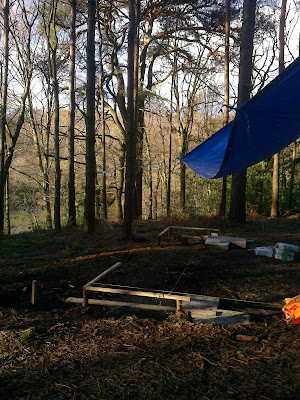 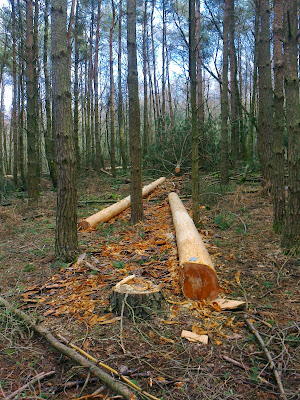 Bark stripped from the logs